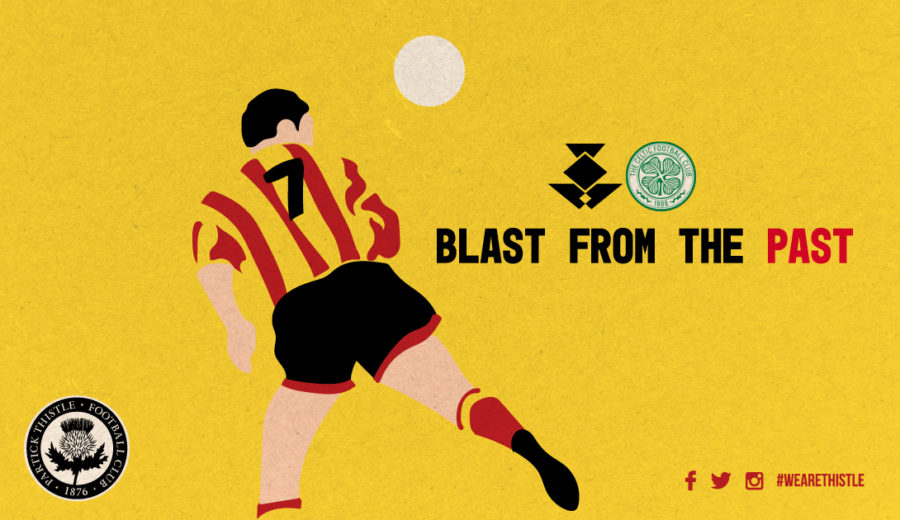 Geordie Shaw Q&A – Blast From The Past special – THE ANSWERS

Ahead of Thistle’s trip to Celtic Park this evening, we spoke to the last Jags player to score a winner at the ground – George Shaw – with all questions provided by supporters. Thanks to all who sent theirs in.

It will be 27 years ago tomorrow that Geordie put the ball in the Celtic net (twice) and here he offers his memories of the game, that season, striking partners, surprise honeymoons and playing under John Lambie.

GS: I remember it like yesterday. I actually should have had a hat-trick when Albert Craig put me through. But it was a great day. We got the goal just before half-time then they pegged us back but I can still recall that late strike and running to the Thistle fans, jumping over the boards and celebrating. The police actually came in to the dressing room after the game to warn me that I could have caused a riot – but Lambie told them where to go and asked them how they’d feel if they’d just scored twice at Celtic Park. Brilliant!

“What did you think when you heard Davie Irons was going to change position that day?”

GS: See with Lambie, anything was possible. He really knew his stuff. We were probably the lowest paid players in the Premier League but he was clever, with things like bonuses for 14 points in a quarter, which made a difference. He knew how to motivate us. We were fine about Davie playing at the back but we weren’t sure how the big man would react. But he was outstanding – we knew he had pace, could tackle and could pass – and he just took it in his stride. We trusted Lambie and he usually got it right.

“You scored twice at Celtic Park and also once when we beat Celtic at Firhill – any preference?”

GS: No, not at all, both were great days. We took a doing in that Firhill game. There was talk before the game that I was leaving, big Duffy had already gone to Dundee, so I didn’t know if they’d play me. People forget I didn’t play that many games with Chic Charnley but I remember Chic saying to me – “you make a run and I’ll find you” – and he did, playing it right into my path. How we won I’ll never know. Both games had great goals and amazing memories. I hope the Thistle fans remember them as fondly as I do.

“Season 1992/93 was some campaign – you scored four against Dundee, what do you recall of that afternoon?”

GS: There was a bet at the start of the season – 15/1 for any Thistle player to score a hat-trick – and the sponsor put £1,000 on it! At the end of the game I had no idea and they just walked up to me and said I’d won a holiday to Florida. I’d just got married and that ended up being my honeymoon! It was a strange game but fantastic to take my place among a select group of players to score four times in one game in the top flight.

“You had a great career – who was your favourite striking partner and why?”

GS: Good question. I had so many, there’s a good few. I was privileged to learn from Frank McGarvey at St Mirren at a young age, then there was Gunni Torfason – who was Iceland captain – and a brilliant player. Then at Thistle wee Colin McGlashan and I really hit it off, in fact I was his best man. But Gerry was the strike partner I played with most of all, at three different clubs. We had a great partnership – I did all the running and he just put the ball in the net! We worked well together, just clicked on and off the park and we and our families remain good friends today. So lots of good strike partners and great memories.

“You’ll like this question – do you still do that wee stepover when you’re walking down the street?”

GS: (Laughs). Not when I’m walking down the street but if I’m playing 5s I can still do it, certainly against guys my own age, not so much against youngsters – I’m not as fast as I used to be. I was just a boy from Castlemilk, used to watch the likes of Davie Cooper, then practice those tricks day in, day out. Then when I became a footballer I would take it in to matchdays.

“And finally, ahead of tonight, any thoughts or predictions?”

GS: Football is strange and can produce the most ridiculous results. Celtic are on an amazing run in the cups, but Thistle have a new management team and if you get an early goal anything can happen. Fingers crossed a Thistle player can take my record away from me, it’s been far too long.