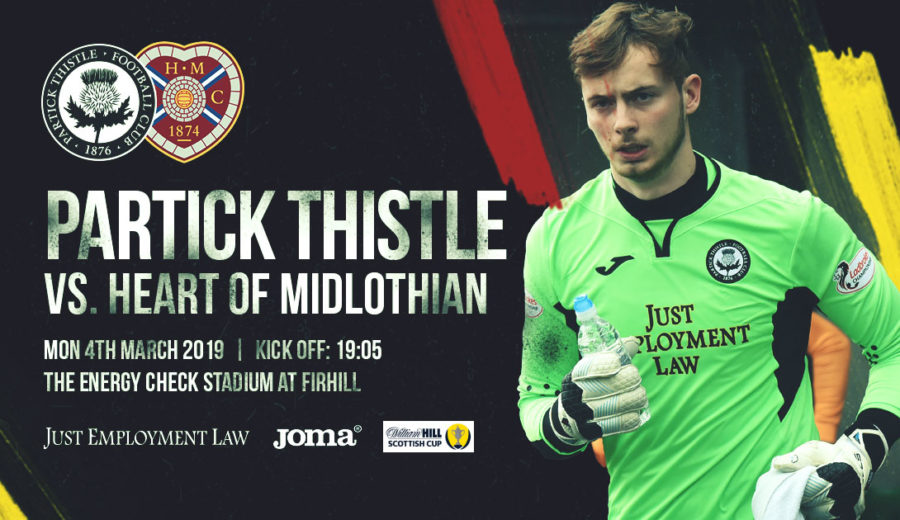 Hazard wants to play his part to create cup success

Preparations are well underway for tomorrow evening’s William Hill Scottish Cup quarter final against Hearts at the Energy Check stadium at Firhill and goalkeeper Conor Hazard is looking forward to the match against the side currently occupying a top six slot in the Ladbrokes Premiership.

“It should be a great game to be involved in. Obviously it’s a big stage to be involved in. It’s the Scottish Cup and it’s a quarter final against great opposition. Everyone in the changing room is buzzing for the game and I think it’s a match that we can go into with our heads held high and make sure we put in a performance to be proud of.

With the BBC cameras in attendance it can be easy to lose focus of the ninety minutes but the Jags number 15 know that the game is the most important aspect.

“It’s something that most of the boys have been used to. We don’t go into the match thinking it’s going to be on tv, we’re going into the game looking to win it and that will be down to us. I think if we play well, and do the right things at the right time we have the opportunity to cause a cup upset.

“If we can pick up runners, not give anything sloppy away then Hearts could be in for a great surprise. There have been a lot of surprising things that have happened in this cup over the years, every cup around the world is the same. We have to be at our best and take the opportunity.”

The goalkeeper joined on loan from Celtic in January and has enjoyed his time in Maryhill so far.

“This is why I came out on loan, to get games and learn a lot and I’m getting that at the moment. Monday night’s game is going to be a big game for me. It’s one of the biggest games I’ll be involved in this year and I want to play my part in getting the win. These games are what everyone gets judged on. It’s on the television which means everyone can see it and watch us. It’s up to us as a team to do well and I’ll be looking to do my part by keeping a clean sheet.”

A 7:05pm kick off on a Monday night is different to what players and supporters have been used to this campaign but Conor knows that routine is key to his match preparation.

“It’s going to be a bit different for supporters because it is a Monday night rather than the weekend but for the players it is the same as every other game. We’ve been training all weekend and we’ll watch the other ties to see who goes through but we’ll be firmly focussed on our game and looking to win it to secure a semi-final slot.

“A night time atmosphere is always a bit livelier and with it being a cup game it’ll be a different atmosphere to a normal league game. Hopefully the fans get behind us from the start and play their part in trying to get us to Hampden.”

More exclusive preview interviews with Shea Gordon and Jags manager, Gary Caldwell, are available to Jagzone subscribers – log in now to see them.

Can’t make it to The Energy Check Stadium at Firhill? Jagzone members can listen to live audio commentary of the match. JagZoneLIVE begins at 6:50pm on Monday.