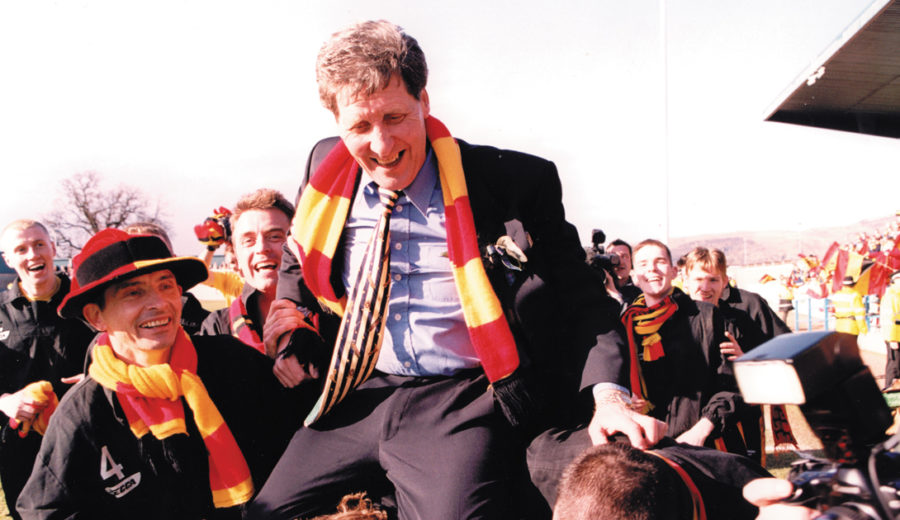 Having cut his managerial teeth with four years at Hamilton Accies, John Lambie first took over at Thistle in November 1988. Although his first stint was relatively brief, he returned to Hamilton Accies in 1989, his impact was clear as he put together a side that was challenging for promotion to the top flight. John had clearly been bitten by the Jags bug as he was back in the Firhill dugout less than than six months later to take charge of a faltering Thistle side whose fortunes had turned dramatically since his departure.

If getting the side up was impressive, then keeping the club in the top flight for three consecutive seasons was even more so.

The 8th placed finish achieved by Thistle during the 1994/95 season allowed the side to apply to enter the Intertoto Cup as Scotland’s representatives. The application was accepted and Thistle had a European adventure to enjoy including a never to be forgotten summer trip to play FC Metz

With a month between the conclusion of the Intertoto Cup and the start of the league season it seemed certain that Lambie would lead the side for a fourth consecutive tilt at the top flight but just as the season was due to kick off he was tempted away to Falkirk. Lambie’s second spell seemed to have signalled the end of his involvement at Firhill but he was famously to return one more time…

It was this third spell in charge for which he will probably be most fondly remembered by most Jags fans. With the club facing relegation to the Third Division of Scottish Football only a late Paul McDonald penalty in the penultimate fixture of the season against Forfar Athletic saved Thistle’s Second Division status.

With three promotion slots available in the following season, hopes were high Thistle would be able to escape the Second Division within Lambie’s first full season. A poor start to the campaign, left Thistle playing catch up and, despite a good second half to the season, the side finished in 5th position.

Promotion was a minimum requirement for the 2000/01 season and Lambie duly delivered guiding the side a 17 point winning margin. He used his ability to get the best out of his players to record a second consecutive promotion in 2001/02 to take Thistle back to the Scottish Premier League.

Midway through the 2002/03 season John announced that it would be his last as Thistle manager and, after his final game, received a fantastic ovation from all sides of Firhill. Lambie’s association with the club didn’t fade following his departure as gaffer though as he stayed with the club as associate director.

Three matches in caretaker charge and his 2007 testimonial game apart the 2002/03 season would be John’s last as manager but that certainly wouldn’t end his association with the club and he remained a regular face around FIrhill.

A true character of Scottish football with lines a plenty – “just tell  him he’s Pele” – John is certainly one man who will never be forgotten by those of a red and yellow persuasion and, although the club may have had competition for his affection from his beloved pigeons, it is safe to say that Thistle held a place close to John’s heart right until the end.

No matter how much time passes John is and will always be a Thistle legend.