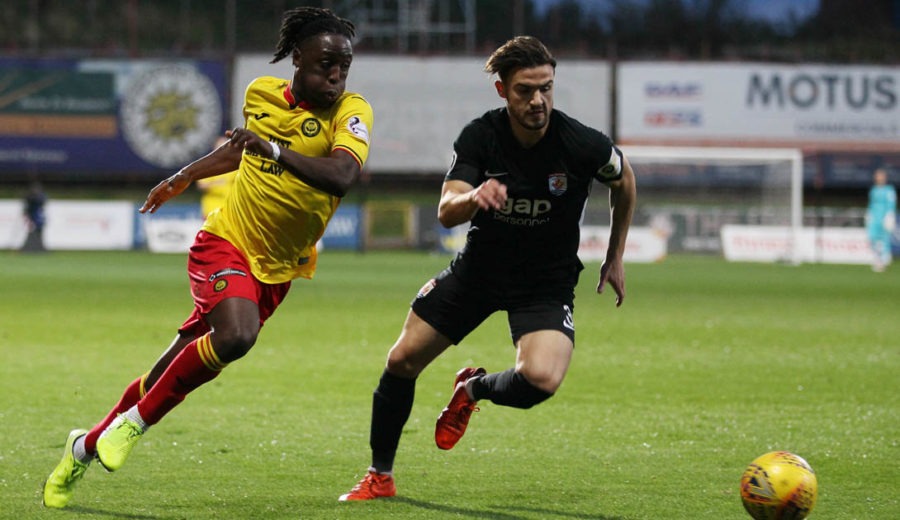 Osman Kakay put in a man of the match performance on Saturday evening as Thistle progressed to the quarter finals of the Tunnock’s Caramel Wafer Challenge Cup. The QPR loanee impressed live on national television, playing a part in both Jags goals. Ossie spoke to ptfc.co.uk shortly after the full time whistle.

“It was a good game. Connah’s Quay were very tough opponents but I thought the boys did very well and put in a good performance. On a personal level, I was thrilled to get man of the match and I’m looking to use that as a platform to get even better now.”

The Jags number 24 came on loan to test himself against different opponents and he feels that the test against the Cymru Premier side has helped improve him as a player.

“I came out on loan to play against men and in men’s football. Connah’s Quay were a little bit different to what you would experience in the under 23s down south. They were right in your faces and it was a battle which I really enjoyed. The standard was good and the squad was up to the task.

“I was happy to wait for the ball on the wings and get involved in the attacking play. It was a very physical game which is great to be a part of and to learn from and experience how to deal with physicality well. It’s all part of the game to learn and experience in lots of different ways.”

Osman played in a slightly further forward than most Jags fans are used to seeing him play, but he admits that he enjoyed linking up with Ryan Williamson down the right hand side of the pitch.

“I was pleased with that connection and I thought I did well. I used to play there when I was younger, I’ve got a bit of pace so I feel I can add a threat to the team. I’ve been playing as a right back but I’m an attacking right back so it helped me adjust during the game.

“I tried my hardest to help the team to get forward and I made it into the box on a couple of occasions which was quite good. Playing as a right back helped me know where I needed to be to support Ryan when he was overlapping or if we were defending a bit of play. It helps to have a good understanding of what is needed from me defensively because you see sometimes that wingers neglect that and it can leave a team exposed.”

Kakay joined the Jags on loan on deadline day, and although it isn’t his first loan spell in Scotland he is enjoyed city life in Glasgow.

“I’m enjoying Glasgow a lot. I was up before when I was in Livingston. It’s a bit more laid back there but I am definitely more of a city guy. Myself and Reece Cole came up together and we’re really enjoying it. We share a flat together which has allowed us to adjust to life in Scotland.

“When I first came to Scotland I thought cities were going to be a lot smaller but Glasgow is brilliant. It has everything we need and that lets us just get our heads down and focus on playing football for Partick Thistle.”

Thistle head into a run of three league games before the cup quarter final in November and Ossie is feeling confident for the matches coming up.

“Any win gives you a bit of confidence. If we can carry on performances like that, we can go further in the cup competitions but we have to focus on the league now. That is two wins in three games now and we’ve got some big games coming up. Hopefully we can push on now and start climbing the table beginning with our trip to Dundee next Saturday.”

A more in depth video interview with Neil Scally is available to Jagzone subscribers now as well as Thistle players, Raffaele De Vita and James Penrice – log in to view.