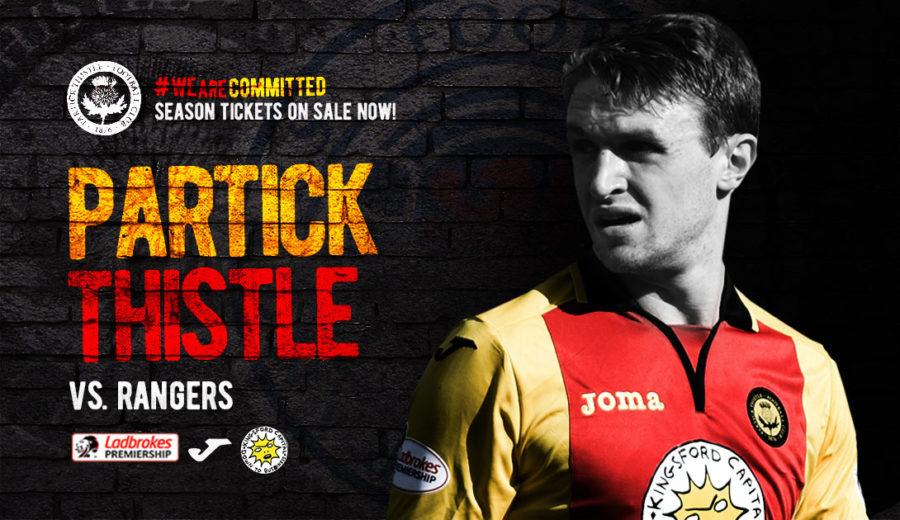 Thistle’s only league defeat in the last eleven games came at Ibrox three weeks ago in a poor performance but Niall Keown is looking forward to having the chance to put things right as Rangers visit Firhill on Sunday.

The defender admits it’s a big driver to the team as they look to take their first points from the Govan side this season.

“We know it is another tough game but that’s why we wanted to finish top six to play in games like this.

“The match at Ibrox was disappointing but I think a lot was down to the fact we had put so much into the previous six weeks and getting ourselves over the line of finishing in the top six. We didn’t perform that day and weren’t at our best. This is a chance to show we are better than that.”

Despite the club already achieving the best finish for three decades Niall is still hoping to make things even better by trying to catch Hearts in fifth place.

“We want to finish in fifth place if we can, we want to do everything we can to try and chase Hearts down. We need to pick points up over the next four games and Rangers is a great opportunity to do that.

“We aren’t taking things easy between now on the season, the pressure is off the club but we put pressure on ourselves to win games and these are the toughest games we will get. We have to go out and perform, we can’t afford to take our foot off the gas. We have a good record against the bottom six but this is the chance to improve against the top teams and really show how good a team we are.”

Manager Alan Archibald was named on the shortlist for PFA Scotland Manager of the Year earlier this week and the on loan Reading defender was full of praise for the Jags gaffer.

“It’s been fantastic coming to the club and the manager deserves nothing less than his PFA Scotland Manager of the Year nomination. This is what the club has been aiming to do for a number of years and he has got us here, it’s a great achievement.

“I know when he took over the club were trying to get promoted to the top flight, he managed to do that and he’s improved things each year resulting in us finishing in the top six this year.

“What he’s done has been great for the club and on a personal level it has been great working with him. I feel he has really helped my game and I’ve really enjoyed working with him and all of the staff.”
There was also recognition for Niall’s central defensive colleague Liam Lindsay who was named in the PFA Scotland Premiership Team of the Year. Niall was full of praise for his team mate.

“Since I’ve been here Liam has been fantastic and from what I’ve heard he was just as good at the start of the season. It’s great for him but also great for the club getting that recognition. The team is selected by the players so that says a lot when you get that recognition from fellow players.

“It’s been great playing alongside him, he’s a similar age and really enjoys his defending too so I’ve built up a good partnership with him and Danny whenever we’ve played together.”

During his time at Firhill Niall has only been on the losing side twice in the league, and he has certainly enjoyed things since his move in January.

“It’s been fantastic coming up here. I hooked up with the lads in La Manga and felt great ever since, I’ve played regular first team football and really enjoyed my football after a few injuries at the start of the season.

“It’s been great to be able to give something back, to be involved in such a great season for the club. To be part of that achievement and be part of something where the club has made history has been very special.”

More exclusive preview interviews, with Ryan Edwards and Chris Erskine as well as Thistle gaffer, Alan Archibald are available to Jagzone subscribers. Log in now to see them.