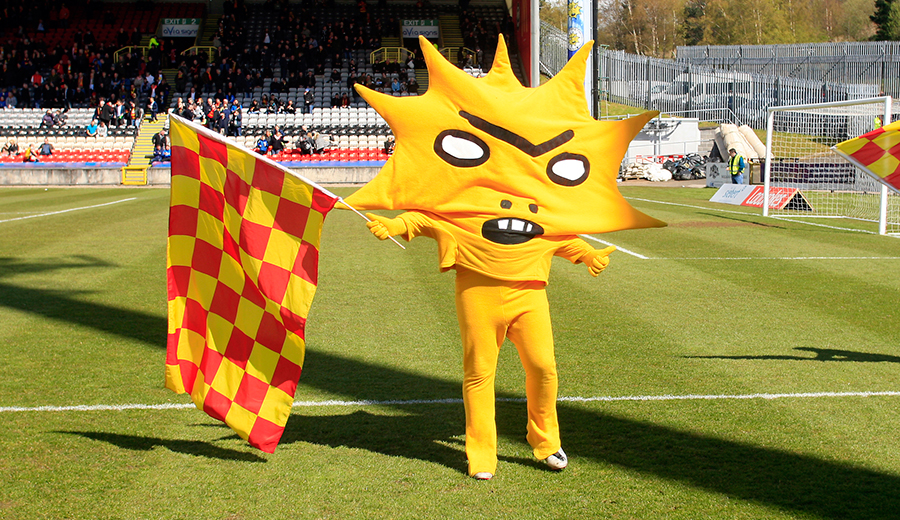 “Terrifying”, “ghastly” and “Lisa Simpson on acid”. Just some of the adjectives used to describe the Jags mascot, Kingsley, over the past year.

Despite the stardom he received when he was first unleashed on the world, the seven foot yellow wonder has taken it all in his stride and is celebrating his one year anniversary at Partick Thistle in style.

Spending the day doing what he loves best by mucking about the Firhill stadium with the players and indulging in his favourite birthday cake, Kingsley also managed to put his feet up for the first time in 12 months.

From charity events and celebrity encounters to mascot races and match day warm-ups, Kingsley has been working tirelessly since he was launched into the world of Thistle last June.

Wow. I can’t believe it’s been a whole year since I moved here from California. I remember when I first arrived and everyone was talking about me and pointing and it was a bit daunting but now I’ve made so many friends, I love when people run up to say hi. I’d probably even call Glasgow my home now as everyone is so friendly, especially here at Firhill.

I’ve met loads of people outside of the club too, including people from local charities which I love to help with and of course all the amazing Thistle fans. It’s always great getting the stadium on its feet and cheering on the boys during matches.

In a year of highlights Kingsley says it is difficult to pick his best moment but admits that there is one that sticks in the mind.

My highlight of the year probably has to be meeting the Hoff at Christmas. It was great to finally meet him after hearing he was such a massive Thistle fan. I wouldn’t say we are best friends now, but I’m definitely excited to see if he’s sent me a birthday card in the post.

I’ve got such a busy year ahead, but at least I have a couple of weeks left before the season starts so I’m going to save all my energy to get everyone even more revved up than before. I’ve already been speaking to our fitness coaches about getting that extra 5% out of my performance so hopefully, come our first home game, I’ll be fitter than ever and raring to go.

Kingsley was designed by Turner-Prize nominated artist, David Shrigley following a meeting with Mike Wilkins, the managing director of Kingsford Capital, sponsors of the club.

Mike is an avid art fan and used his passion, mixed with the new sponsorship, to team up with various artists throughout the year, including David once again to design a foam thumb giveaway for 2,000 fans.

Since David’s design was launched in June 2015, Kingsley has taken the world by storm, and has a busy year planned ahead with the club.

For more information or to find out what is planned next for Kingsley, visit: https://ptfc.co.uk/news or follow him on Twitter @ThistleMascot