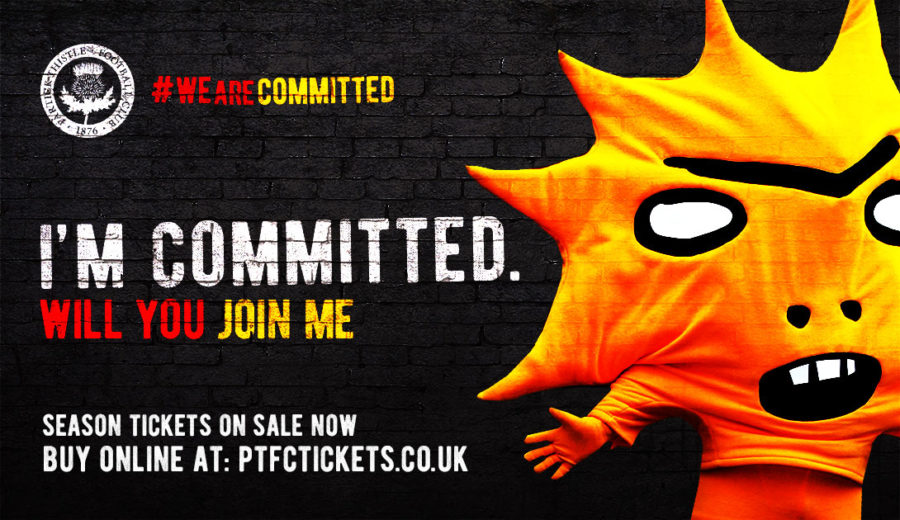 Partick Thistle’s mascot, Kingsley, has more than his birthday to be celebrating this week as he has finally committed his long term future to the club.

Created by Turner Prize nominated artist, David Shrigley, Kingsley joined Thistle during the summer of 2015 and has been ever present (for home games at least) ever since.

Shooting to fame after his initial unveiling, Kingsley has featured in publications across the world including: TIME Magazine, CNN, Fox News, The Guardian, The Times, 11freunde and the BBC.

The giant yellow ray of sunshine also clocked up hundreds of millions of social media impressions as he captured hearts around the world.

While there have been bumps in the road of his Firhill career – most notably a humiliating defeat at the hands of the Paisley Pandas in January 2016 and something of an identity crisis last summer – Kingsley has proved invaluable on matchdays, never too busy to pose for a photo or spend time with the fans.

On signing his new deal, Kingsley said: “Since I arrived here a couple of years ago, I’ve fallen head over heels in love with not only Partick Thistle and our fans, but also Maryhill and Glasgow. It’s a fantastic club in a fantastic city and everyone has been so lovely since I moved here from California – people really do make Glasgow.

“I’m super excited about extending my stay here and can’t wait to get next season off to a great start.”

Ian Maxwell, Thistle’s MD who led the negotiations to keep Kingsley at the club, said: “I’m pleased that we have persuaded Kingsley to stay despite interest from elsewhere. We hope he stays with us for many years to come.”

Kingsley has committed, will you join him? 2017/18 season tickets are now on sale.