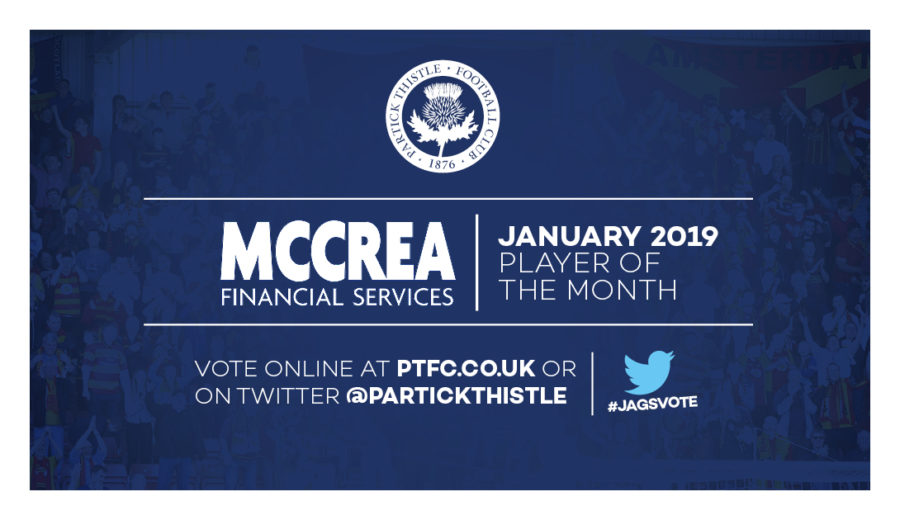 With Thistle unbeaten since the turn of the year, Gary Caldwell’s side has started 2019 in very positive fashion. A hard earned draw at Tannadice kicked off the New Year and was followed with another draw against Falkirk in a game the Jags really deserved to win.

The William Hill Scottish Cup was up next for the Maryhill Men and a potentially tricky tie against Stranraer was negotiated without any drama. The best of the month was held until last though as Thistle earned all three points against an in form Queen of the South with an excellent display that saw each of this month’s nominees shine.

A good month for Thistle then, and there was certainly no shortage of potential nominees, with a few players sure to be disappointed they missed out. So, without further ado, here is your January shortlist for the McCrea Financial Services Player of the Month: 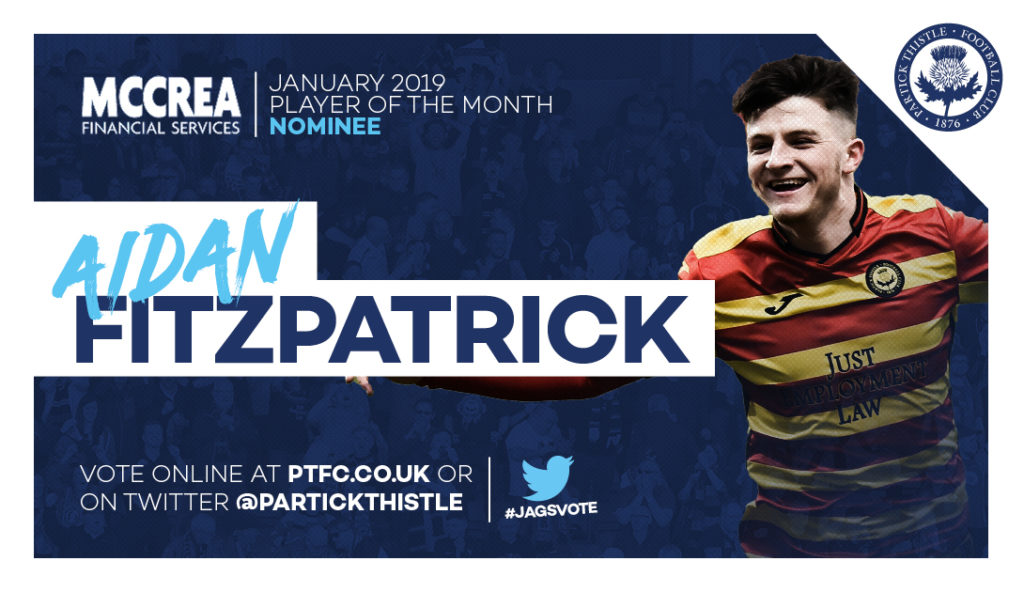 At just 17 years old Aidan Fitzpatrick is fast becoming a fans’ favourite at the Energy Check Stadium at Firhill and, with two man of the match performances in his two appearances this month, you can see why. A goal against Stranraer extended his tally to four for the season and ensured he remained in the starting 11 for the next game against Queen of the South. Fitzy again showed why he is attracting plenty of interest with a scintillating performance against the Doonhamers.

Vote for Aidan at ptfc.co.uk 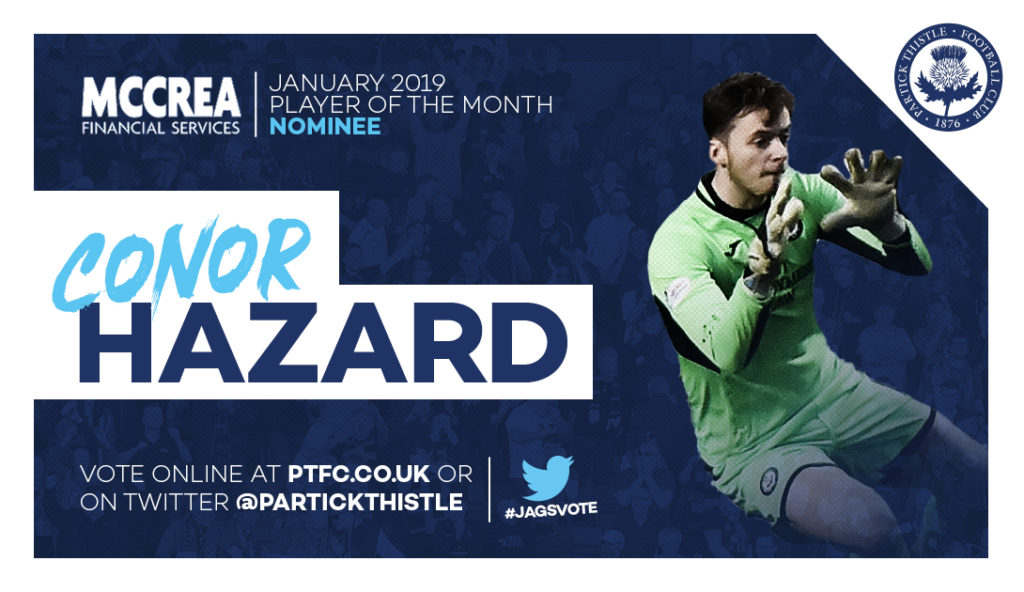 Conor has only been a Jag since the start of the year but what an impact he has had. The towering ‘keeper has made crucial saves at crucial times and has rightly received praise for his performances. He has played every minute of every game this month and, despite only being 20 years old, has brought a much needed calmness to a back five that hasn’t played a lot of football together. It isn’t just his shot stopping that has drawn plaudits though, with his distribution and kicking range adding a new dynamic to Thistle’s attack. 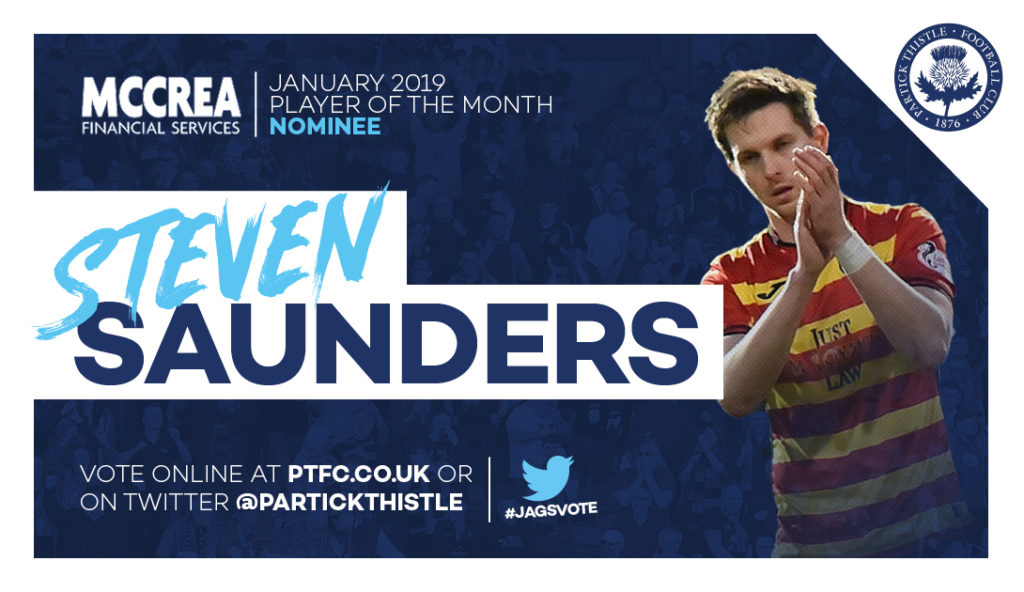 Like Conor, Steven has played every minute of every game since joining the Club at the start of January. The former Motherwell man has been a rock at the centre of defence and has helped to transform the Jags backline in recent weeks. He has proved how well he can time a tackle and even got himself on the scoresheet against Stranraer, the first league strike from a centre back for Thistle this season. Another valuable looking January addition, Steven could be in for a few more nominations before the end of the season if his form continues. 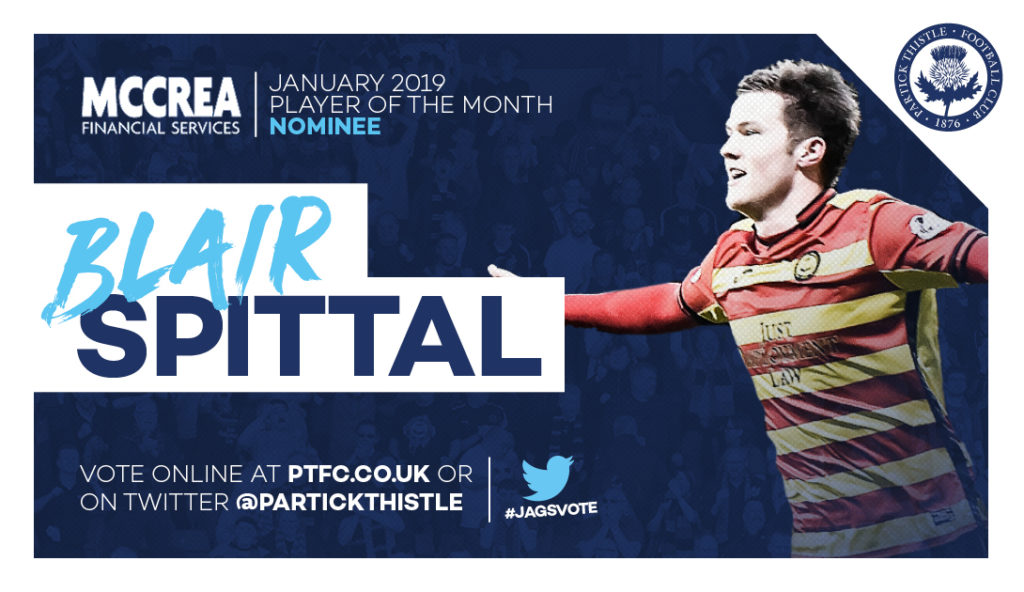 Blair’s form has been transformed since Gary Caldwell took charge of the club, with the midfielder taking his goal tally to seven for the season notching twice this month. Continuing to play a more central midfield role, Spittal looks dangerous almost every time he gets the ball. Forming a formidable midfield partnership with Stuart Bannigan and Craig Slater, January’s upturn in form is in no small part down to Blair’s energy and determination.

So, there you have it, your McCrea Financial Services Player of the Month nominees for January. Now it’s over to you, so get voting and make sure your favourite gets to take the trophy home. Voting is open until 5pm on Friday,