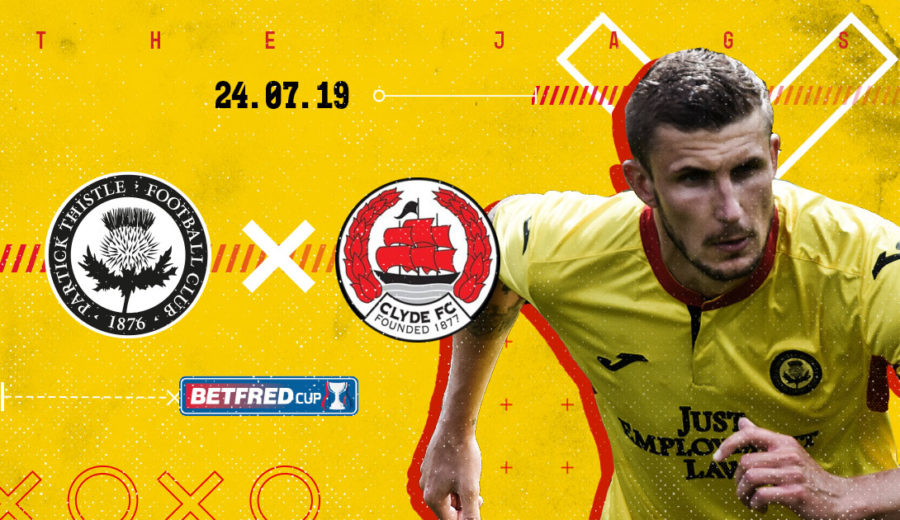 Sean McGinty is looking forward to the visit of Clyde to The Energy Check Stadium at Firhill as Thistle look to progress to the last 16 of the Betfred Cup.

Thistle know a win is all that is required to top the group and progress to the next round and McGinty says the players are all well up for the match.

Speaking to ptfc.co.uk he said: “We had the day off Sunday after the game on Saturday to recover and we were back in on Monday and Tuesday working hard towards the game against Clyde.

“We’re all looking forward to it, I thought it was a good performance against Hamilton on Saturday and we have improved in each game, so hopefully we can get the job done against Clyde and can start to get excited about a last 16 tie.

“We know the rewards of getting the win against Clyde, we know they will be a tough side, we know they have quality in their team. We saw against Queen’s Park and Airdrieonians that we need to be at our best, but we will go out and be professional and look to do what is required to go through to the next round.”

Sean feels that performances have improved in each of the matches so far, culminating in a good 2-2 draw away at Hamilton on Saturday and he is hoping to take a further step on Wednesday night.

“We’ve not had as many friendlies this year so we’ve been building using the Betfred games and I think we’ve looked sharper as the games have gone on. I think people saw on Saturday when things come together and we pass the ball well we can create some good opportunities and we will look to improving on that tonight.

“I think we are gelling together nicely, we’ve got some new faces who are settling in and I think if we go out and perform like that and take another step I’m sure we’ll get the job done. It won’t be easy though and we need to guard against complacency.”

With a number of new faces in the dressing room, the defender admits it does take time for everyone to gel on the field but he thinks there are signs already that that is happening.

“I think it does take time for everyone to gel, we got to know a lot of the new boys well over the summer and La Manga helped that. We were out there working hard and with the likes of Ryan Williamson and Tommy Robson coming into the defence we did a lot of work as a defence to get ready for the season ahead and the games are only improving that.

“I think all the new boys have settled in well and it can only improve the squad and provide competition for places which drives everyone on.”

McGinty spent a period out of the side last season but came in at the end of the campaign with some superb performances. Since then he has started this season in a similar way, the number six is hoping to continue that as the league season gets underway.

“It was a tough period being out of the side last year but I feel I’ve learned a lot from it. I worked hard and the boys who came in I learned a lot from. I watched them and tried to improve myself and when I got the opportunity to come back in I feel It was a case of keeping my place in the team and I feel I have managed to do that. It’s now all about taking that into this season and continuing to work hard.

“We want to get off to a good start this season and we want to put ourselves in amongst it at the top of the table. That will only come through hard work.”

“It’s our last home game before the league season starts and we want to get the fans excited for the season ahead. We want to put on a show for them and show them what we are all about and what we will look to play like this season. We’ve worked on it in training and it’s now about putting it all into practice. I’m sure the fans will go away happy.”

More exclusive preview interviews with Stuart Bannigan, Alex Jones and Jags manager, Gary Caldwell, will all be available to Jagzone subscribers soon – log in to see them.

Can’t make it to the the Energy Check Stadium at Firhill? Jagzone members can listen to live audio commentary of the match. JagZoneLIVE begins at 19:30 tonight.