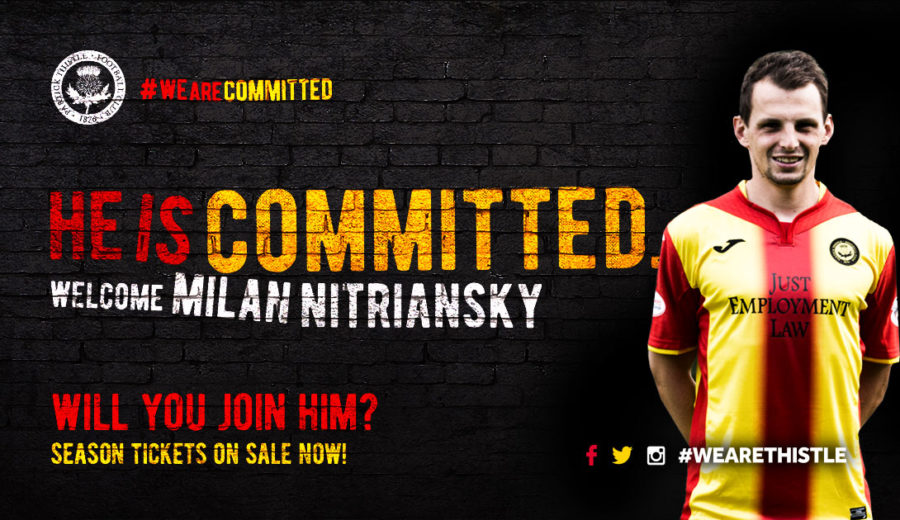 Nitrianský joins the Jags ahead of Ladbrokes Premiership kick off

Manager Alan Archibald has been working hard to add to his squad ahead of the Ladbrokes Premiership campaign kicking off at Easter Road tomorrow afternoon.

We are delighted to confirm this morning that Milan Nitrianský has joined the club, subject to international clearance, on a deal until the end of the season.

The 26 year old Czech began his career with České Budějovice before earning a move to Slavia Prague where he spent four years before spending a season with Serie B side Avellino. He returned to the Czech Republic playing with Slovan Liberec and Bohemians 1905 prior to his move to Firhill.

Manager Alan Archibald spoke to ptfc.co.uk shortly after the signing was announced:

“It was important that we added competition and cover in the full back areas and Milan provides that. He’s a good age and has had recognition at every age group of the Czech national team, but most importantly he is fit and ready to play in the Scottish Premiership.

“Having spoken to him he’s ambitious to do well at this level in Scotland so we look forward to seeing him on the pitch.”

All at Firhill welcome Milan to the club and look forward to seeing the right back in the red and yellow jersey in the season ahead.

Milan has committed, will you join him? 2017/18 season tickets remain on sale.