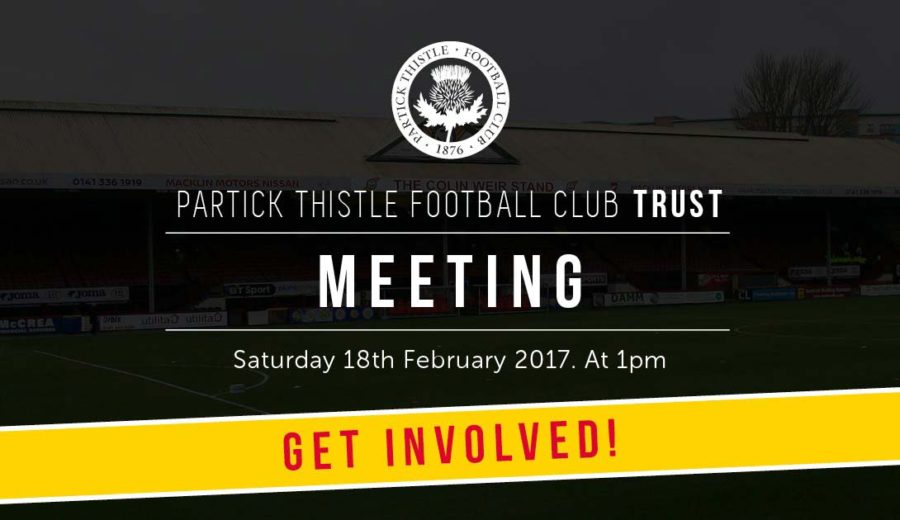 Included in last night’s match programme was an article from the Partick Thistle Football Club Trust. We have replicated the article, in full, below for any Jags fan who didn’t manage to get a copy of last night’s programme.

Partick Thistle fans’ representatives on the PTFC Trust met formally with the Club Board on 20 January for the first time since the new Trust was established.  With a full report due to go to the next Trust meeting, fans’ representative and Trust chairman Foster Evans summarised the meeting saying:

“Using the survey from last autumn, which received the views of over 700 supporters, we had a friendly and open discussion on the fans’ views of the Club and advised the Board what the fans’ priorities are at this time. We also brought them up-to-date with the discussions at the Trust meetings with fans in May and November last year.

“We were pleased with the way the conversation went and felt that genuine dialogue was being encouraged. That’s not to say we will always get everything we want. But there’s clearly a high regard for fans and what we are saying that bodes well for the future.”

The next meeting is arranged for 1.00 pm on 18 February in the Colin Weir Stand, before the game against Hamilton. Foster is keen that there’s a good attendance from the fans:

“We told the Board that it was important that Trust meetings allow supporters to get their teeth into subjects that matter to them, not just the Club. Most important of all, it shouldn’t be just a meeting for meeting sake. In response, the Board agreed but raised concerns around the attendance at the previous two meetings. The Club has run a campaign since the turn of the year to promote the next meeting and it’s hoped that that, combined with meeting on a match day, will encourage a better attendance.”

At the suggestion of Foster and Pauline Graham, the second fans’ rep on the Trust, the Board agreed to a ‘Meet the Board’ event, which will include the manager, Alan Archibald, in March this year to improve the direct communication between the Club and supporters, which was another priority identified in the fans’ survey. This will give fans the opportunity to raise on and off-field issues directly with the Club Board and the manager.

At the next meeting, in addition to Foster and Pauline providing feedback on their discussions with the Board, on the agenda will be:

–          a presentation by the Jags MD Ian Maxwell on the challenges facing Scottish football, their impact on Partick Thistle’s business plan and our ability to compete as a team, including the end of the current TV deal;

–          a discussion on the possible introduction of Strict Liability by the Scottish Government and what response fans think the Club should have to this;

–          Jagzone, how it’s working and potential service improvements for non-users;

–          and the proposal for a short life fans’ working group to consider and identify ideas for “attracting more fans” to games. This was one of the top priorities identified by fans in the recent survey.

Foster told Directors that Trust meetings should be an open and safe space for supporters to raise any other issues that they feel should be addressed with the Board going forward.  He is encouraging fans to direct any questions to him and Pauline to take forward saying:

“This was a very positive start – the Board was open to new ideas and supportive of the Trust and our priorities. We look forward to more constructive discussion in the year ahead. Fans should grasp this opportunity to influence what’s happening at Firhill and get along to the Trust meeting on the 18th February.”