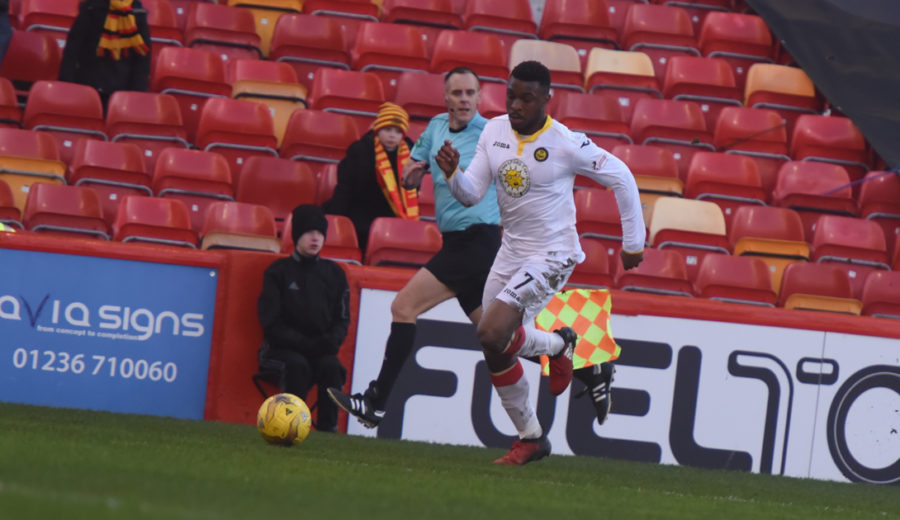 Amoo: Great to be back on the pitch

Saturday was to prove a frustrating day overall for the team in red and yellow as Thistle went down 2-0 to Aberdeen at Pittodrie. Despite the score line and lack of points for the Jags there were plenty of positives to take from the performance. One major tick in Alan Archibald’s notebook would have gone alongside David Amoo’s name as the Thistle winger caused Andrew Considine all sorts of problems throughout the first 45 minutes.

Ptfc.co.uk caught up with the Jags’ number seven as the team travelled back to Glasgow and it’s fair to say he would happily have swapped his personal performance for a result in the Granite City.

David said: “I was pleased with my performance and it felt great to get back out there but I would happily have traded any aspect of my personal performance for a result out there. We were easily worth at least a point and it was very frustrating to come away with nothing.

“It’s been the story of our season as we’ve created a few good chances and we haven’t been able to convert them. It’s disappointing but it would be worse if we weren’t creating the chances in the first place. We just need to keep working hard and believe that if we keep creating the chances will start resulting in goals.”

With Thistle dropping to ninth it would be easy for the players to start losing heart but it is fair to say that, despite some bad luck, the mood in the camp remains upbeat.

“It’s always disappointing to lose, especially when it means you fall down the table but we are playing really well at times and we just need to keep going.  Ade had a good chance today that he created for himself and Ryan Edwards had a header where he got a push in the back and put it over the bar.

“We’ll get back to the training pitch this week and really focus hard on putting these results to bed. We have St Johnstone in the cup on Saturday which is a chance for us to make a quarter final and then it’s Hamilton at home which is already shaping up to be a massive, massive match. We’re a positive group and I’m pretty confident that if we keep working hard the goals, and in turn the results, will come.”