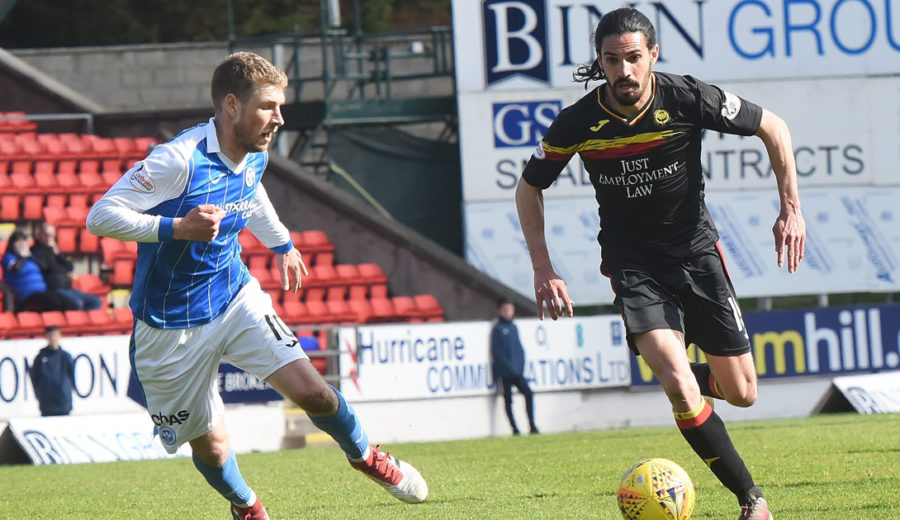 RYAN EDWARDS: WE HAVE RENEWED BELIEF

For two weeks in a row now, there has been one man at the centre of Thistle’s successes; Ryan Edwards. The Australian midfielder notched the winner 9 days ago against Hamilton Accies and he also won the penalty for Thistle’s equaliser against St Johnstone this past Saturday. The Jags’ number 19 has had to operate as a substitute for both these game but has made a lasting impact on the result of both matches. Ryan caught up with ptfc.co.uk following another successful cameo appearance in the red and yellow.

We started by asking Ryan his opinion on the 90 minutes as a whole and the midfielder felt it was a vastly different game to the Hamilton game last week.

“Overall, it was a pretty poor game with both teams struggling to show their quality. I don’t think the pitch helped; it was very dry and bobbly in spots but even so, we should have done better with the ball. Obviously, the first goal has been so important in this fixture over the last few seasons so to fall behind just before the break again was majorly disappointing but I feel like after the Hamilton game, we have a renewed belief that we can fight back from behind as we did to grab what could end up being a crucial point.”

Although Ryan was disappointed not to be on from the start at the weekend having scored the winner a week prior, he was more than happy to bide his time and make an impact again when his moment did come.

“Of course you want to be in from the start but it’s a team game and that becomes especially important at this time of the season. All the boys realise that if you’re not picked, being stroppy isn’t going to help anyone. Last week I got just under half an hour and it was the same this week. Last time I made my impact and my goal was to do the same today and thankfully in the end I’ve done that by winning the penalty and it’s another substitute, in Conor Sammon, who buries it which goes to show the importance of those on the bench.”

Despite the Jags failing to win at McDiarmid Park on Saturday, the ex-Reading man feels that the draw keeps the team’s positive post-split momentum going as they push for Premiership safety.

“When we looked at the split fixtures, we looked at 15 potential points and four of the opening six available is not a bad start. Although we’ve done well here recently, it’s not easy to come to Perth and get a result so it’s pleasing that we have managed to get something. In both games we’ve shown fight and desire so we’ll definitely be looking to carry that into the final three games.”

The Jags number 19, Edwards ended by praising the Thistle faithful. The red and yellow army created a special atmosphere for the Hamilton game just over a week ago and then travelled in terrific numbers to back the side at McDiarmid at the weekend so Ryan hopes that, with two massive home games coming up, the supporters continue get behind their team as the Jags seek survival in the top flight of Scottish football.

“Last week produced one of the best atmospheres that I’ve played in and the support was incredible again here. The fans were very loud and at times it felt like a home game which helped motivate us as it seemed like the game was drifting towards a defeat. Hopefully that support continues heading back to Glasgow for the next two games. Friday night’s game is going to be crucial and having a massive backing from the fans would help us greatly so we’ll be hoping to see as many Jags there as possible.”

As Ryan mentioned, Thistle now look towards Friday night’s meeting with Ross County at the Energy Check Stadium at Firhill as the Jags aim to move away from the Staggies. Kick-off is 19:45 in Maryhill.

More reaction from Baily Cargill and Conor Sammon as well as Jags gaffer Alan Archibald is available now to Jagzone subscribers. Log in now to see it.