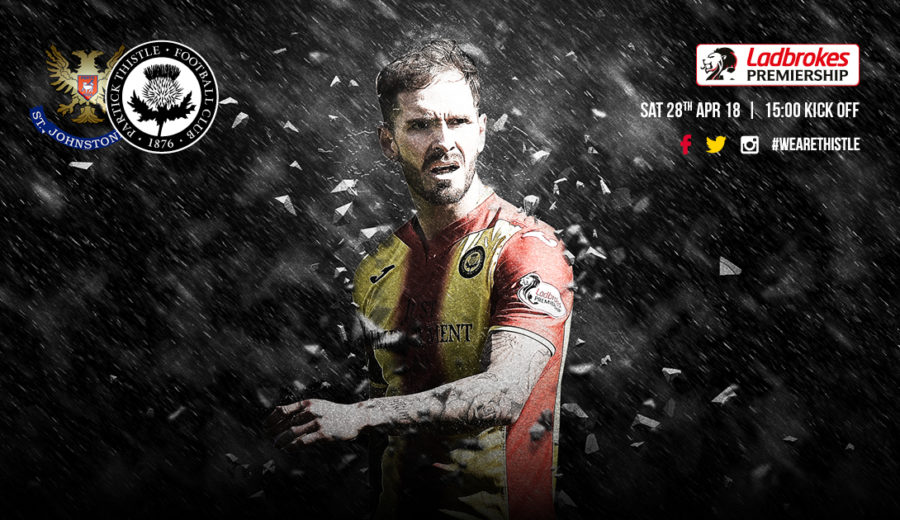 Martin Woods is hoping to build some momentum after a big win against Hamilton on Saturday.

The victory lifted Thistle off the bottom of the table and Martin is hoping to continue that as Thistle travel to Perth to face St Johnstone looking to come home with another vital three points.

Speaking to ptfc.co.uk he said: “Momentum is huge, you always find that the team who can build up the most momentum as the season finishes will pick up the results. The boys have trained well, we’ve worked hard and been in great spirits. We need to carry that into the game.

“Everyone is really upbeat. Saturday was a long time coming and everyone is feeling good and really looking forward to the game against St Johnstone.

“It’s another massive game, we know that. I think whoever out the bottom sides is the most consistent will stay up so Saturday is important to keep that going and build on the result against Hamilton.”

Woods says last weeks result has made a difference to the mood about the squad but he feels there was positives there before Saturday.

“Sometimes it just takes one result to suddenly change the atmosphere about the place. Results had been poor and there had been a lot for the fans to be frustrated about. I think there had been good performances in that run of poor results but we let ourselves down with mistakes or not seeing the result through to the ninety.

“We knew we can turn things around and hopefully we can put some results together at the right time of the season and get ourselves out of this position.”

“It’s always good to go to a place where you have a good record. I played in the last game there and it was one of the better results and performances of the season. Another one like that would be great.

“We know what we will be up against, they are organised, they are hard working and we need to go and show the best us and get a positive result.”

“We need to show the same effort and character that we showed against Hamilton for the rest of the season. I didn’t think we deserved to be a goal down, we were the better side for most of the game but we’ve been involved in games like that before so it was a relief we managed to get the goals.

“There are still things we can improve on and take into Saturday and hopefully come away with another hard worked three points.”

With the teams either side playing each other it gives The Jags the chance to move ahead or catch up depending in that result, however Woods is concentrating on our own results

“With Ross County and Hamilton playing each other a win would be big for us because something has to give in that game. The main thing is that we win our game and concentrate on ourselves. The split is good in that if we win all our games it is all in your own hands, we win all our games, we stay up it’s as simple as that. It’s not as easy as that but go and put a performance like Saturday for the rest of the season and why not?”

“The fans are huge, we fed off them on Saturday. Even when we went behind they stuck by us and hopefully with the club putting on busses they will be at Perth in huge numbers and create a great atmosphere for us. It really helps.

“The fans have been brilliant, I’ve been in a similar position before and the fans have really turned on you. Fans on the pitch, booing all the time, clapping when you are subbed, it’s not nice and it makes it tougher for you to play. The fans here have been fantastic with us, more than we maybe deserved at times, but they have really supported us.”

Can’t make it to McDiarmid Park? Jagzone members can listen to live audio commentary of the match. JagZoneLIVE begins at 2:30pm on Saturday.