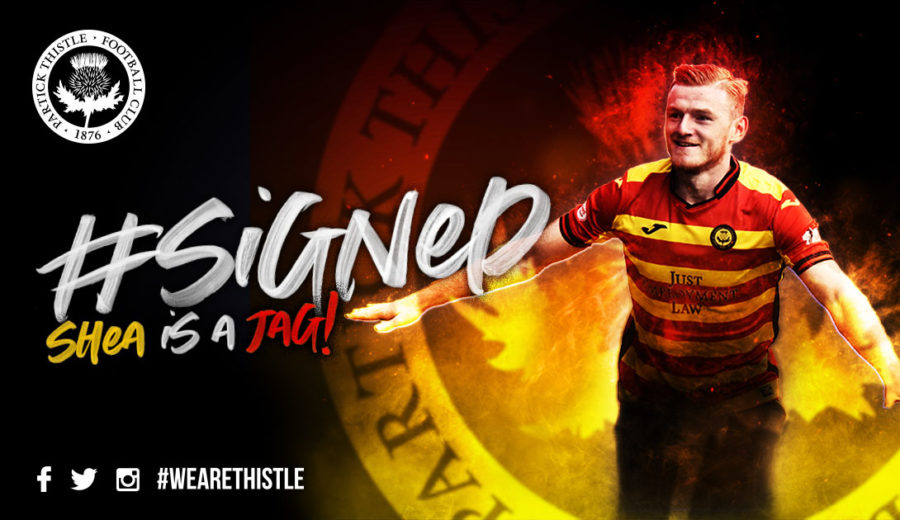 Partick Thistle can today confirm the signing of midfielder, Shea Gordon, from Motherwell on a two-year deal.

The 20-year-old spent last season on loan with the Jags but has made that move permanent, choosing to swap Motherwell for Maryhill following two and a half years at Fir Park.

Gordon made 14 appearances during his season-long loan with Thistle, having been denied more game time by injury. Despite spending much of his initial spell at Thistle going through recovery the dynamic midfielder still made a significant impact. Shea returned to first team action in a 3-0 win at Cappielow Park and would go on to start all seven of Thistle’s final games in the 2018/19 campaign; a run that saw the Jags lose just once.

He netted four goals last term including two in the first six minutes of the season as he bagged a brace in the Betfred Cup at Stenhousemuir. He would then score twice after his return, both coming against Ayr United, with the first of those goals being a winner at Somerset Park which proved crucial as Thistle secured Championship safety.

“I was over the moon to get it done because I have really enjoyed my time at the Club so far. It was good to get it over the line because it has kind of been lingering the last week or two so to get it all confirmed is a weight off the mind.

“The last few years have been one year here and there so a two year deal really allows me to concentrate on my football and doing everything I can to make this club successful. We are all hungry to do well for this club and the target now is to make a strong start to the season and hopefully we can all kick on from there.”