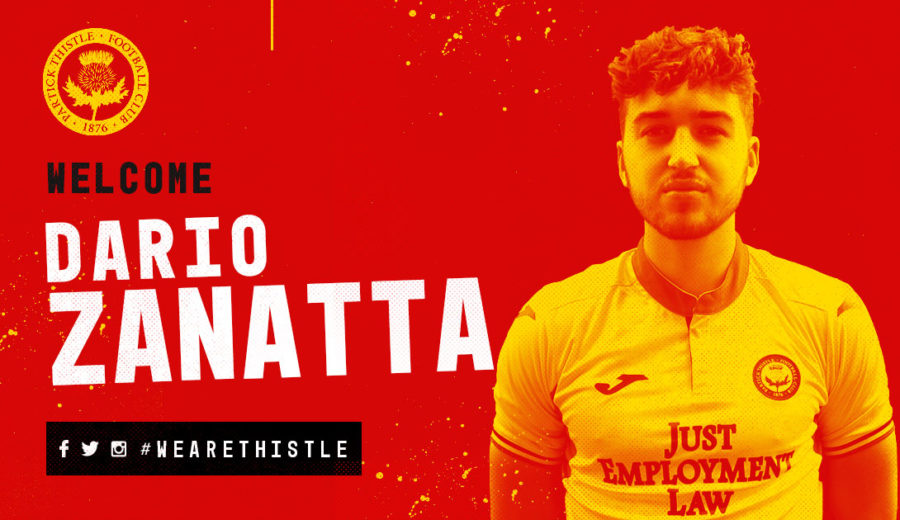 Partick Thistle can today confirm the signing of Dario Zanatta from Heart of Midlothian on a two-year deal.

The 22-year-old joins the club off the back of a successful loan spell at Alloa Athletic last season during which he played 39 times, scoring eight goals.

He was the Ladbrokes Championship Player of the Month for December 2018, ending last year with three goals in three games including an 89th minute winner against Dundee United which won the Wasps’ Goal of the Season award.

As well as eight goals, Zanatta produced 14 assists for Jim Goodwin’s side as Alloa stayed up in the Championship despite being the only part-time team in the division last term.

He has also had temporary stints at Queen’s Park and Raith Rovers scoring 13 goals over those two spells.

The Canadian has represented his country at under 16, 18 and 21 levels and went to the 2017 CONCACAF U20 Championships.

Upon joining the club, Zanatta said:

“It was made clear to me that I wasn’t going to get the game time I was looking for at Hearts and Thistle got in contact with me early on so I’m just excited to get it sorted and looking forward to getting games and kicking on.

“Obviously I got a couple of goals against Thistle last year so hopefully the fans have an idea of what I can do and what I’ll be providing for Thistle this year.”