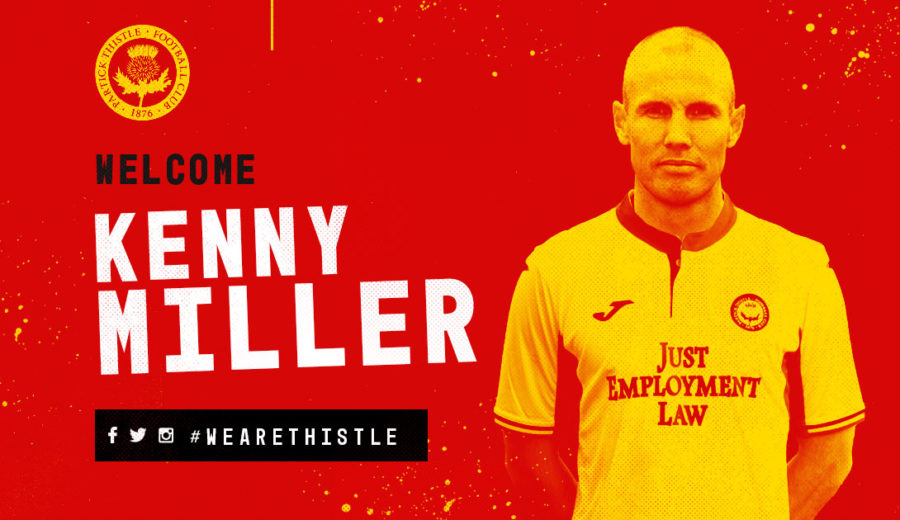 Partick Thistle can today confirm the signing of striker, Kenny Miller, on a one-year deal, subject to clearance.

The veteran forward recently left Dundee after a season at Dens Park and now becomes Gary Caldwell’s fifth signing of the summer.

Miller started out as a youth with Hutchison Vale Boys’ Club before being signed by Hibernian where he would make his professional debut against Motherwell in November 1997.

The Musselburgh native would score his first senior goals during a loan spell with Stenhousemuir, bagging eight goals in 13 showings for the Warriors.

A further 13 goals during the 1999/2000 season convinced Rangers to buy Miller and from there he had spells with Wolverhampton Wanderers, Celtic and Derby before returning to Rangers in 2008. During that second spell at Ibrox, Kenny won three back-to-back SPL titles to add to the one he already had from his time at Celtic.

Stints at Bursaspor and Cardiff City preceded a move across the Atlantic to sign with the Vancouver Whitecaps of the MLS where he spent three years before then making another return to Rangers.

The attacker spent four more seasons with the Govan side during which time he helped them earn promotion to the Scottish Premiership, scoring 14 goals as they won the Championship title in 2016. Most recently, Miller has been with Livingston and Dundee.

On top of a terrific Club career, the 39-year-old also has significant international pedigree with 69 caps and 18 goals for Scotland over a 12-year period.

Miller will wear the number nine this season for Partick Thistle and now travels to Spain to join up with the squad at the La Manga Club pre-season training camp.

“There was a lot of speculation early in the window and I think initially that’s all it was. As the closed season progressed though, and particularly when things got wrapped up at Dundee, things progressed pretty quickly. I’m absolutely delighted to come here and work with someone whose views on football align very closely with my own. It’s fair to say he has had a few bumps along the way but the detail the manager goes into and the way he speaks about football is something I can very closely identify with.

“I can’t wait to hit the ground running and I’m very confident that I will be able to do that. Despite being in the latter stages of my career I’m as hungry as I’ve ever been to be successful. I want to win, I want to score goals, I want to be the most determined guy in the dressing room and I look forward to doing that here at Thistle.”

“I do think though, when you get to my age, you have to take on a different role and I’ll certainly be trying to help my teammates out as much as possible. We have a range of ages and experience levels in the squad so if I can play a role in helping some of our younger players develop then I’ll be very happy to do that.”