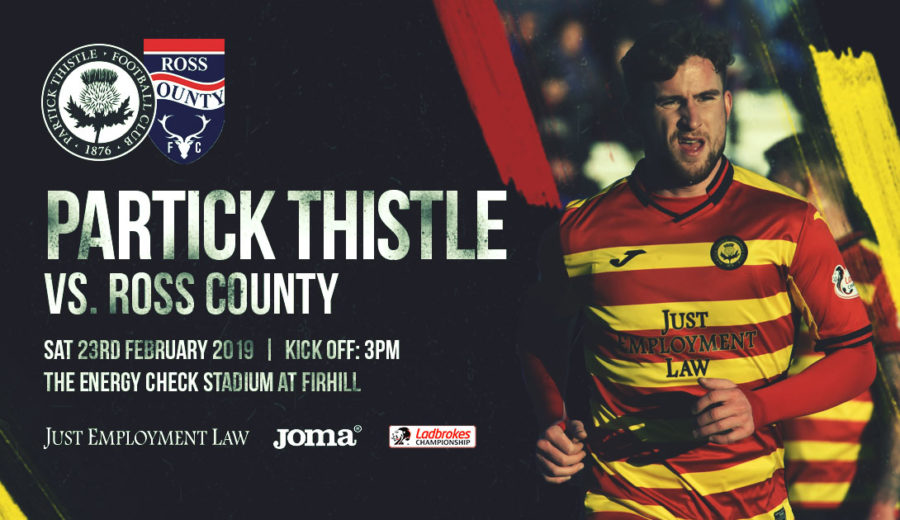 Slater aiming to remain unbeatable in 2019

Craig Slater is hoping to keep the feel good factor around Maryhill for another week but knows league leaders, Ross County, will put Thistle’s unbeaten 2019 to the test.

The Jags have won the last five on the bounce and are hoping to make that six on Saturday at The Energy Check Stadium at Firhill.

Slater knows what faces the team and he is looking forward to it. Speaking to ptfc.co.uk he said:

“We are on a good run at the moment and we want that to continue that for as long as we can. We want to keep winning at the end of the day but we know that will take a huge amount of hard work. The results have been good recently but it won’t stay that way by itself – we have to earn it.

“Matches like this one allow us maybe to see how far we’ve come in recent weeks. It will be a stern test of this group of players but I firmly believe we will be more than a match for County when they come down the road.”

After defeating Alloa last weekend Thistle have risen to eighth in the table and Slater now has his sights set on those above.

“Saturday gives us a real chance to draw closer to the teams above us. They won’t maybe expect us to win – they’ll look at the fixture and think it will be the end of the run but we want to prove them wrong.

“Momentum is big, going into the last part of the season you want to have positive momentum and we have that just now. We have been playing really well and picking up some good wins too. We went up to Inverness and won and it was good to get that monkey off the back with the away win but we knew we had to follow it upand we did that against Alloa.”

Thistle are unbeaten in 2019, two draws to start the year were followed by five wins and Craig feels things are looking up within the squad.

“With players coming in there was a freshness in the squad after January and you have seen that since the turn of the year. It has made a huge difference and we are playing really well.

“Winning games is massive and brings confidence to the team. It really does make such a difference. We knew before January we weren’t too far away with our performances, things just weren’t happening for us and we knew results weren’t good enough.

“The run we are on has totally changed the mentality, you can see it through the entire squad. Everyone is enjoying their football, players are trying things and not taking the easy option and it’s paying off in the way we are playing.”

“I’m enjoying things just now, I feel I’m playing my part in helping the team and getting forward to help in our attacks. I maybe want to try and add some more goals but I think as a team we are playing very well and we need to keep that going.

“We are all working hard in training and you can see that on a match day, everyone is organised and when what you have been working on in training comes off during a game then it’s great to see.”

Thistle have a big week ahead and the midfielder is looking forward to it but knows they have to take one game at a time.

“It’s a massive week coming up, we’ve got the game at the weekend before a big game away to Dunfermline and then the cup game as well. However, we’ll take it all one game at  time starting on Saturday, we need to focus on that and get the job done. It’s a cliche to say just one game at a time but it is the only way you can look at it, especially in a run like this. Three points at home has to be the priority.

“These are all games you want to be part of, having games close together is always good when you are playing well, you want to get out and play as often as you can. We are enjoying things just now and long may that continue. Hopefully we can keep it going and get the club back to where it should be.”

Can’t make it to the Energy Check Stadium at Firhill? Jagzone members can listen to live audio commentary of the match. JagZoneLIVE begins at 2:45pm on Saturday.