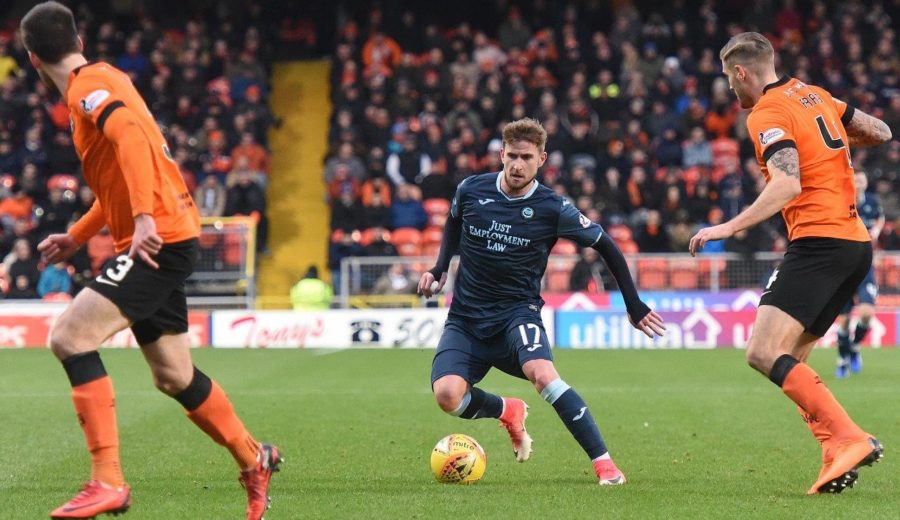 In a terrific first half display away to  Dundee United at the weekend, there was one man very much at the centre of things for Thistle. Jags number 17, Craig Slater, operated as part of a diamond midfield, a system which certainly saw him showcase the full range of his ability as a footballer, providing the base for many red and yellow attacks. On top of that, he secured an assist when his corner was nodded home by Kris Doolan from close range.

Craig spoke to ptfc.co.uk following the match and started by expressing his disappointment at the fact that Thistle were only able to claim a draw, despite some great chances:

“I thought that we were excellent in that first half and really controlled the game. We looked dangerous every time we went forward and should have been ahead by more. However when we only go one up there’s always the chance for them to get back into things and that’s exactly what happened. Their goal comes from one small mistake and we’re punished for it again which is tough to take.”

Slater felt that the Jags’ play in the first half merited more than a one goal lead at the break.

“It’s something that we said in the changing room after the game – we should have killed it off, they shouldn’t have had the chance to come back. We definitely had the chances to get a second but to be fair to their ‘keeper, he’s pulled off a couple of top class saves to keep us out.”

The former St. Mirren youth player said that he had enjoyed his new role as part of the diamond in the middle of the park.

“I loved it. I felt like I had a bit more freedom to move with the ball and use it which is what I tried to do. With Gary Harkins, Stuart Bannigan and Blair Spittal all in there too, it means we have a good footballing midfield who will look to use the ball in creative ways which I think showed during the first half.

“I thought all of the new boys did very well and I think you can see already that they’ve improved the overall quality of the squad, which is great.”

With Falkirk up next for the Maryhill men it’s time to focus attentions on the Bairns who currently sit one point above Thistle. Craig knows just how big a game that one is going to be but insists the positives from Tannadice have given the side a boost.

“The game becomes even bigger after they managed a win against Ayr. We’d have loved to have matched them with a win against United but we couldn’t do that and we have to move on now.

“The performance from the game gives us something to build on ahead of next week’s match and we’ll be ready for them come Saturday.”

More reaction from Kris Doolan and Stuart Bannigan as well as Jags gaffer Gary Caldwell is now available to Jagzone subscribers. Log in to see it.

Jagzone subscribers can rewatch the full game or view extended highlights of our Ladbrokes Championship fixture.