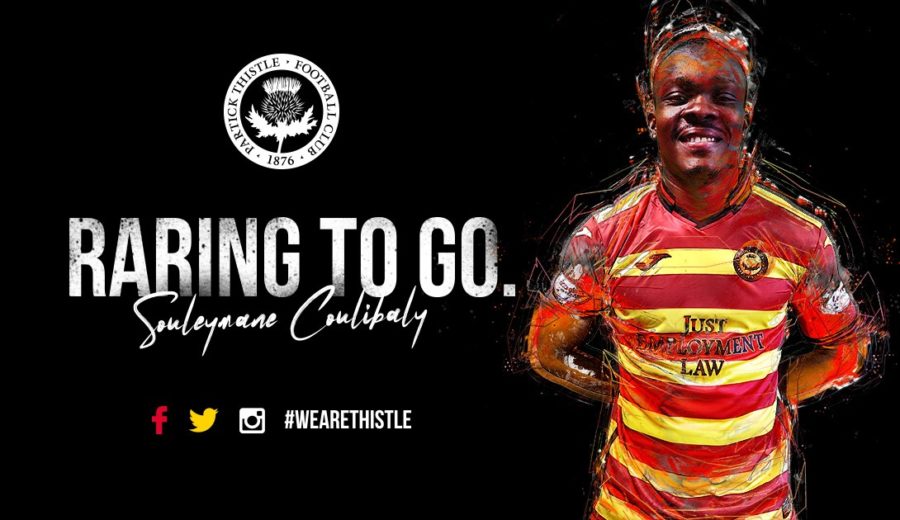 Partick Thistle Football Club can today confirm that Souleymane Coulibaly has been officially registered with the Scottish FA as a Partick Thistle player and is eligible to play with immediate effect.

Following the Scottish FA’s request to reject the Egyptian FA’s initial refusal to grant an International Transfer Certificate (ITC) FIFA has granted a temporary ITC which allows Souleymane’s registration to be completed.

On receiving the decision, Partick Thistle Chief Executive, Gerry Britton, said: “It’s great news and we are ecstatic to finally get Souleymane properly registered to play with Partick Thistle Football Club. He has obviously been through a tough time recently and, having spoken to him on numerous occasions since he first arrived at the Club, I know he is simply desperate to get back playing football.

“It has been a long road and a lot of hard work but I would like to thank the Scottish FA for its assistance in the process and hopefully Souleymane can go on to have a very successful season as a Thistle player.”

Souleymane Coulibaly himself said: “I am absolutely delighted to be allowed to play football again and I cannot wait to get back on the pitch. It has been a very difficult time for me but I just need to put that behind me now and concentrate on playing the game that I love. I haven’t played a proper match in quite some time now so I know there is still a lot of hard work to do before I will be back to my best but I am determined that I will get there.

“I would like to thank the Club for all the support and I hope to be able to repay some of the faith they have shown in me as soon as possible.”

An extended interview with Souleymane is now available exclusively to Jagzone subscribers, click here to watch.