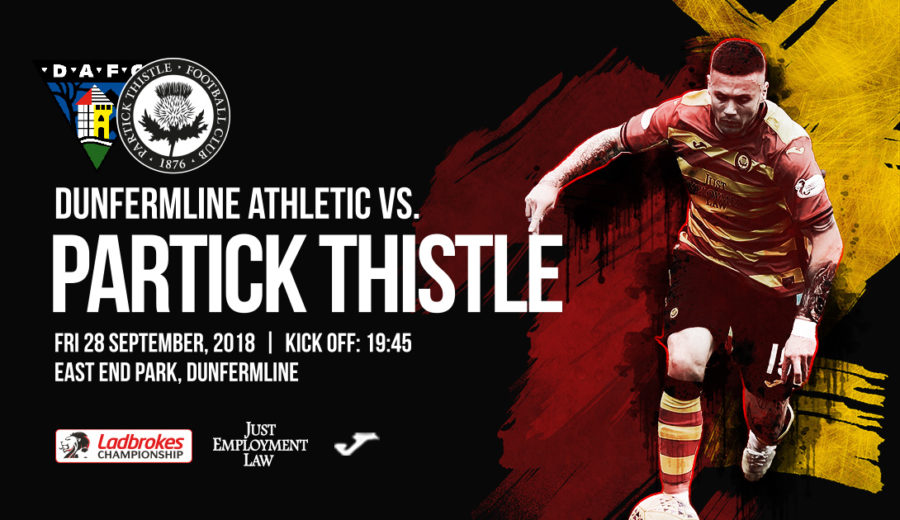 Miles Storey is looking forward to travelling to take on Dunfermline as Thistle look to take their home form on the road.

After the 3-2 home victory over Queen of the South, Miles admits it’s a confident camp and one that is desperate to reverse a poor away record so far this season.

Speaking to ptfc.co.uk he said: “We’re looking forward to it. After the result on Saturday we are feeling good and confident and we want to take that into the game on Friday night.

“We spoke after the win on Saturday; we all said we have to take that performance away from home too. We know we have to be better away from home, we have been great at home but we need to do that away too.

“We have to start winning away too, we seem to be playing some good football at home with some good passing moves and we need to take that play and perform like that no matter where we are playing.”

“It’s been frustrating, we want to build a good run of results and we seem to be stop start because we can’t perform away from home but it’s up to us to put that right, we have the chance to do that on Friday and start to build some proper momentum.

“The league table is tight, we are right in that pack and a win on Friday puts us within a point of the top of the table, it shows how important going on a run could be and how tough this league is, everyone is beating each other and we want to be that team that strings a number of wins together”

The Jags number nineteen has been performing well after a run in the team but has yet to notch his first league goal this season, something he is desperate to do.

“I feel I’m improving each week with a run in the team, I’m an attacking player so I’m desperate to get that first league goal of the season. I really need to get that first one and hopefully go from there. I had the chance in the last minute last week and maybe I should have squared it but I knew it was last minute, I felt I had played well during the game so tried to get myself that goal and my legs just gave up on me,  so I was disappointed.

“The manager and Scotty keep telling me to try and shoot more and I feel that goal could make a massive difference to my game.  You see how that first goal can lead to more, obviously Dools and Spittal got their first goals against Inverness and Doolan has scored again on Saturday and Blair has got two including a great second that maybe he doesn’t try if he wasn’t feeling confident after his previous goals.

“We have a lot of different people getting on the scoresheet and that can only be good for the team, even James Penrice down my left has managed to get a couple and that gives us a good threat going forward with so many different weapons.”

“I always enjoy Friday night games, there is something good about playing in a night game and the Friday night gives us the chance to get three points and sit back and relax over the weekend while everyone else plays. That is why it is important to get the win, you don’t want to be sitting after a loss.

“We are obviously on TV and we want to show what we are all about, we want to play good football and play similarly to the first half on Saturday, patient passing football with that killer edge.”

More exclusive preview interviews with Stuart Bannigan and Jags gaffer, Alan Archibald, are available to Jagzone subscribers – log in now to see them.

Can’t make it to East End Park? Jagzone members can listen to live audio commentary of the match. JagZoneLIVE begins at 7:30pm on Friday