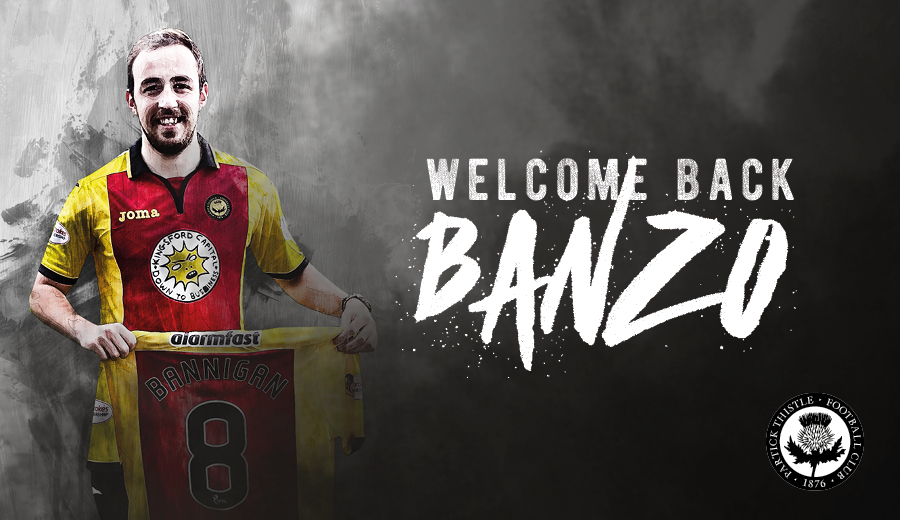 Pre-season training is well underway as Thistle get ready for the new season which kicks off, with the Betfred Cup, in just 18 days’ time.

Manager, Alan Archibald, has managed to secure another player for his squad ahead of the new campaign and it is a face that will be extremely familiar to Jags fans.

Midfielder, Stuart Bannigan, has signed a two year contract with the club keeping the 23 year old at Firhill until the summer of 2018.

Stuart joined Thistle full-time, making the step up from the under 17 side, in May 2009 and has made 166 appearances for Thistle scoring nine goals, a tally that he will hope to add to over the coming two seasons.

The midfielder’s potential was evident right from the start of his time at Firhill and he made his debut against Clyde in the Challenge Cup on the opening day of the 2010/11 season. He would spend the second half of his first campaign on loan to Ayr United, helping them achieve promotion to the First Division.

Stuart emerged as a mainstay in the Thistle team, starting the 2012/13 campaign as the side’s first choice left back, before moving up the field and into his more familiar midfield role which he has gone on to make his own. During the course of Thistle’s title winning season, Stuart also won the first of his three Scotland under 21 caps.

Over the past three seasons, Stuart has excelled in the Jags’ midfield for Thistle as the side has established themselves as a Ladbrokes Premiership side. His 2015/16 campaign ended prematurely when a knee injury sustained in early March ruled him out for the remainder of the campaign.