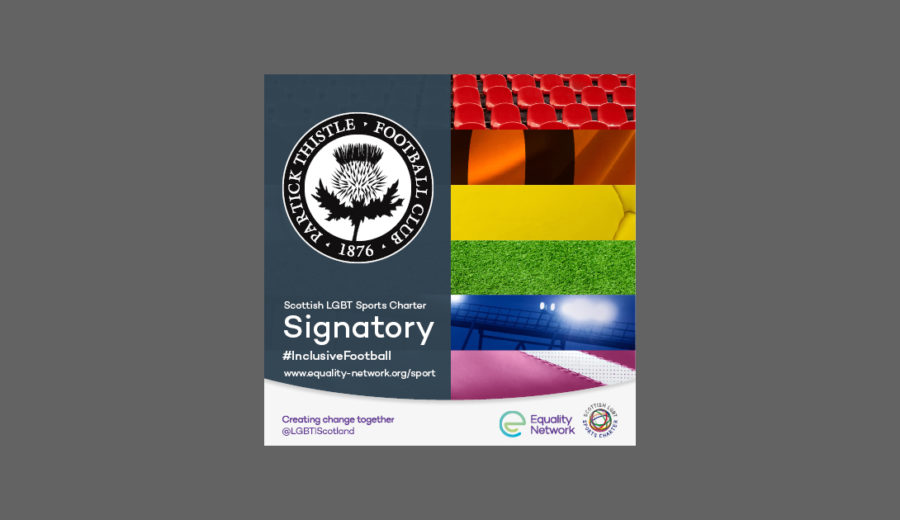 Thistle Teams Up to Tackle Homophobia

Partick Thistle have today joined professional football clubs in all four of the SPFL divisions in teaming up to better include lesbian, gay, bisexual and transgender (LGBT) people by signing the Scottish LGBT Sports Charter.

The Charter includes a set of five principles which aim to remove the barriers to sport for LGBT people. Over thirty governing bodies of sport have already signed up, including the Scottish Football Association.

Scott Cuthbertson, Development Manager of the Equality Network said, “We’re delighted that these clubs, from across all four SPFL divisions, are today making a commitment to LGBT supporters, officials and the next generation of LGBT players.

“Today’s message is loud and clear, everyone is welcome at football and we are working for a more inclusive game.

“We don’t yet have any openly LGBT professional players in the men’s professional game in Scotland but we know there are plenty of LGBT fans. Thank you to those clubs who have already taken this step. For clubs who haven’t yet signed up and who want to make their club more inclusive, our door is always open.”

The charter states as its aim that “Scotland will be a country where everyone can take part, enjoy, and succeed in sport at all levels whatever their sexual orientation and gender identity”, it was developed in consultation with sports governing bodies (SGBs), other sports stakeholders and LGBT people.

Ian Maxwell, Managing Director at Partick Thistle Football Club said, “Football can be a very powerful tool to help fight all types of discrimination. Football is a universal language so no matter what your race, religion, background, gender or sexuality, kicking a ball about or watching your team on a Saturday helps put everyone on a level playing field. That is why, as a club, we are very proud to sign up to the Scottish LGBT Sports Charter.

“There is no place for discrimination of any kind in football – or sport more generally for that matter – so being able to play our own small part in helping to eradicate it was a no brainer for us as a club. We look forward to working closely with the Equality Network in the coming weeks and months in order to play our part.”

The Equality Network say this is the first step in coordinated efforts that they hope will encourage more LGBT people to get involved in football. A study by the Equality Network launched in 2012 showed that 57% of LGBT people would be more likely to participate in sport if it was more LGBT friendly, and that football was the sport identified as having the biggest challenges to overcome in relation to LGBT inclusivity.