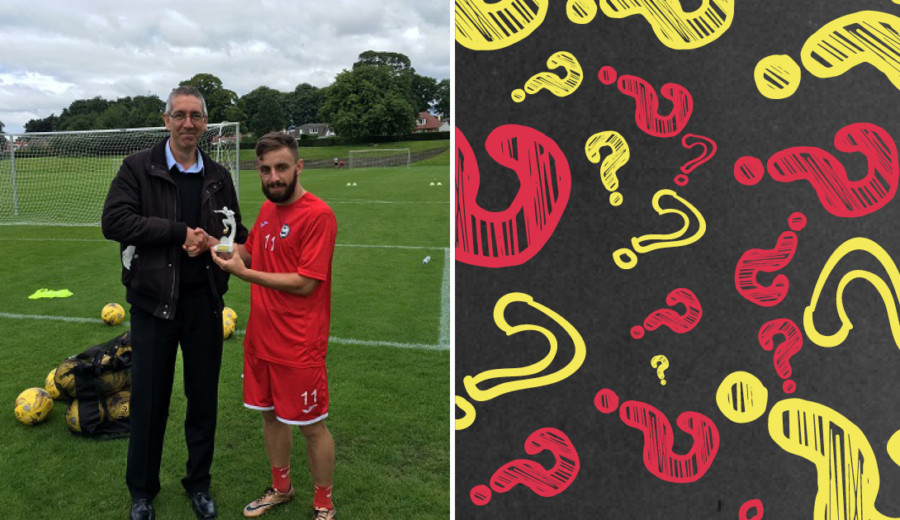 A new Ladbrokes Premiership season means a return to football for Thistle fans after a summer break. This afternoon’s fixture marks not only the start of a brand new season, but also a brand new Fan v Player Quiz in the matchday programme.

Now in its third season, the Fan v Player Quiz has proved extremely popular, so popular in fact that slots for fan representatives this season have already been fully booked for the season!

It’s also extremely competitive in the dressing room which each player desperate to scoop the bragging rights of winner.

The only player to get a perfect ten last season was Steven Lawless and he received his winners trophy earlier this week when programme co-editor Raymond Stark popped along to the training centre at Garscube.

Upon receiving his award Steven commented: “ I’m delighted to have won the quiz, it proves what most of us already knew, I’m the clever one in the team! Although when you see it’s myself and Gary Fraser who have been best over the last two years it doesn’t say much for the rest of the lads!”

Below are the ten questions that Steven answered correctly to scoop the prize and remember to pick up your match programme at today’s game, priced at only £3, to see how Callum Booth got on in the new contest.

Steven was asked his questions in the build up to Thistles 2-2 draw with Kilmarnock in August 2015, so the answers are dated.

1. Who was Steven Lawless’ last goal against?

2. Which English Premiership club formerly played at The Dell?

3. Which Jags star wears the No.3 shirt this season?

4. Which MLS club does Robbie Keane play for?

6. Who is the Leicester City manager?

7. In what year did Thistle beat Celtic 4-1 in the League Cup Final?

8. In which country would you watch Sturm Graz?

9. Who scored our only goal v Kilmarnock in a 4-1 defeat last season?