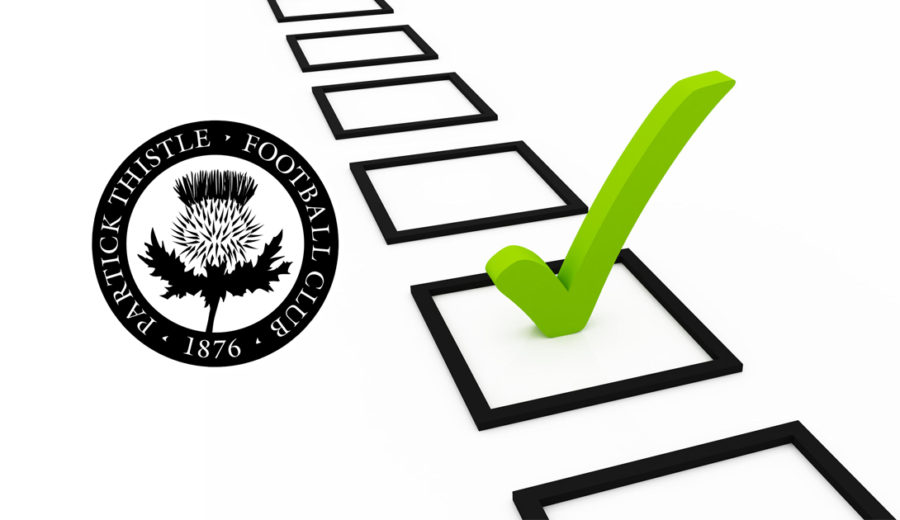 The Partick Thistle Football Club Trust (PTFC Trust), which represents fans’ shareholding in the club, has revealed the outcome of its first survey (full list of the original survey questions is available here) held over the first few weeks of this season. An impressive 735 fans responded to a range of questions, from ticketing to communications.

More the half of those who replied were season ticket holders, a quarter had previously been season ticket holders and the remainder had never had one. Almost half were between 45 and 65 years old, just over a quarter were between 25 and 44 years old and the remainder were spread across other age ranges. 95% were male with just 5% being female. The majority of those surveyed regularly attend games, with a quarter going as and when they can. Full results from the multiple choice section of the survey are available here.

Two thirds of fans were in support of the PTFC Trust meeting with supporters three times a year (beginning, middle and end of the season), ideally on a match day. However, as a result of changing fixtures and in order to keep the momentum going, the next PTFC Trust public meeting is not on a match day. Instead it will be held at 7pm on 15th November in the Aitken Suite. Following this, the next meeting will be held on Saturday 18th February at 1pm. The date for the final meeting this season will be announced once the post-split dates are known.

When it came to what the Trust should focus on initially, there were three things that topped the list:

1. Communications between club and fans

3. Reflecting supporters’ views back to the Board

These were followed by match day experience, facilities and services, how the club is run, ticketing and pricing, with on field performance at the bottom of list of priorities that fans saw the Trust being able to deal with.

“We are delighted that so many fans took part and thank you if you did. There were many suggestions for improvements, which we expected, but there were also positive comments about what’s been happening over the last couple of years. It is encouraging to know that there’s a sense we are heading in the right direction as a club. Knowing what fans are happy with – as well as what they’re not – will allow us to focus on getting it right. However, even at this early stage, some comments in relation to communications have been dealt with as the new website and Jagzone are now up and running, which they weren’t when the survey was being taken.

“Where there have been suggestions that we believed could be addressed immediately, we shared them with the club. For example, there were comments in relation to the food offering for young Jags fans. The club agrees there’s scope for improvement and will come back to the Trust with a proposal before the next proposed meeting at 7pm on 15th November at Firhill.

“Fans have been honest about what they want so it’s now over to the Trust Board to act on these views. At the meeting on the 15th, we will discuss in detail the priorities identified and firm up the list to share with the Club Board in December.

“I would urge you to come along and help us shape that further. Communications was top of the list as the most important thing to fans and this is a great start by them – we now have to match it in our response if we are to have genuine ongoing engagement that leads to change.”

Supporters were also given the opportunity to offer their views on what the Trust should focus on in future. These were ticket pricing, match day experience, food and catering, stadium / facilities and fan-related activity.